That sure as hell wasn't five minutes. What do you mean? No. I won't accept that answer. You're out of your fucking mind. Yeah, I heard you and no, I don't care. I won't. I can't. Please? Pretty please? I'd donate vital organs at this point if you would. No, really. I would. I swear!

You're breaking my heart here. See? It's pouring out on the floor in some kind of gelatinous mutiny. There are pirates in those sticky red waters. Stop it.

It's impossible. You jumped through a time portal in order to arrive five minutes later. It's not that to me. Will you quit? Just stop?

I'm begging you. Stretch out time. If you chewed it for awhile, it'd get soft. Like reworked bubble gum snatched from under a school desk. God no. I haven't done that. That'd be gross!

Fine! Now fuck off! I mean it. I'll find something heavy to hit you with. Does it look like I'm kidding?

Alright. Alright! Enough already. You've ruined my entire day with your screeching. I'll get up.

Even though you're a goddamned liar.
Posted by Carrie Clevenger at 6:00 AM 4 comments:

I'm packing shells of tolerance with ribbons of black wine. Outside, three peeps from the mockingbird that doesn't know what manners are. I wait for my day to turn light. The sun rises like a memory, slow and dazzling--unmistakable in its meaning.
There's a cold undercurrent to the tropical breeze before it's shredded by the ceiling fan. The TV drones to itself and I understand why. There are no open ears.
Tongues test nerve. Tucked between the words "I" and "you" is the silent word. Wounds scabbed over until the next big spill. Dust replaces the sound of a working heart--pink and raw like undercooked pig. The pen is full of dissension.
Halls papered with footnotes of what was. Cracked sidewalk leads to what will be. Left over is am. An overturned, empty cup that once held warmth.
Posted by Carrie Clevenger at 12:43 AM 3 comments:

Flashes spattered the interior of the Chevy, like fire and water, as Jerry sped through another red light.

“They getting any closer?” He glanced over the back of the seat where I sat crumpled against the door, Frankie moaning against my breast.

Hot wet spread like a virus over my thigh. I clutched at my husband’s ridiculous politician’s tie. The clip gleamed like an executive pen, gold.

“I can’t see,” I breathed at the ridge of upholstery against my cheek.

Our blood pooled together, making us one for real. I’d once have given all of mine to fill his heart again. Frankie was fading, and I’d live to pay for his funeral. Black or blue hearse? Would the kids want to go? How many stitches?

Frankie groaned and shifted with the sway of our Impala. It was white, like his dress shirt had been. Washing away from the fender was angry red. Handprints, where Frankie’d grabbed the car instead of me. I was already flat and left as dead.

I dropped my gaze to his blanched face. His eyes rolled in his head like spotted cue balls. Anywhere on the ceiling, to the window, and finally to focus on me.

Frankie’s speech slurred. Mother was a nurse. He wasn’t bad. He hadn’t stood in the way when Eddie showed his pistol, either. It was down to business, his old partner had said.

I spread on a buttered smile. “Hold on, honey.”

Yesterday, those police behind us would have been in front of us. Tomorrow, we’d be famous, even if Frankie hadn’t just won the poll.

Jerry cursed and wrestled with the steering wheel through deeper waters. Maybe it’d flood. Blood and water. Better than drowning in booze. I petted Frankie like the dog he was.

His suit coat lay crumpled in the floorboard, just within grasp of my straining fingers. I dragged the expensive fabric over Frankie’s face, drawing his attention once more.

He needed a blood transfusion. The hospital lay just beyond twenty breaths. It took twelve, and Frankie couldn’t even deliver a good kick. His mouth lay open in final surprise.

I looked surprised when they pronounced him dead at the scene. The police grumbled in disappointment and took Jerry in as a consolation prize.

Blue. His hearse was blue.
Posted by Carrie Clevenger at 10:39 PM 11 comments:

Email ThisBlogThis!Share to TwitterShare to FacebookShare to Pinterest
Labels: another death scene, Fridayflash 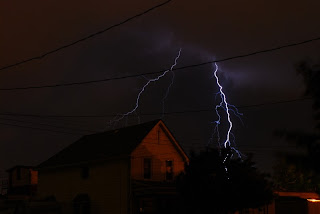