Water from the Well 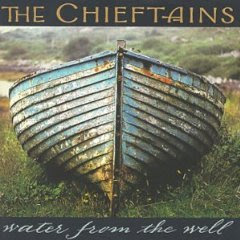 It seems I do better with a sporadic insertion of mindless blathering, rather than try to keep up with day-to-day dum-dums here in this blog. Twitter is a blog-killer also, and I'll not be the first to tell you that.

I'm listening to The Chieftains, "Water from the Well," and if you've never heard these kind old gents, you're missing out. I think tonight I'm into talking about music, how it affects my writing, my moods, and consequently, my day.

This weekend, we're working frantically on the house in order to get it into shape. It was a small thing really, just a small leak in the a/c unit that has been silently creeping beneath the carpet and mainly in my closet, but eventually we were introduced to an odd odor and damp spots in the carpet. This has prompted the property owner to get us the replacement carpet that we need, but we have to move things around rather than just move into a new place so he can drop the carpet and do whatever else.

I think it accurately represents my writing life for now. The Muse has crept beneath it all, slowly destroying any other hope at enjoying/surviving without a massive hemorrhaging headache and bleeding eyes. I have to stay diligent and keep him well-oiled and happy, this Muse. He won't allow me to ignore him, else he bleeds into the rest of my life, transforming me into some sort of social degenerate.

Music is that lubricant, if I can be so bold to use such terminology. My husband noticed as we were putting things in their place this weekend, that my music tastes range from the sedative-style Enya, all the way to metal, like Slayer. Music from Istanbul. Live music from Scotland. Irish jigs. Aborigine chants. I explained to him that they were portals into a separate mood, each of them, providing a very different environment in which to submerse myself to write. Just like the fresh crop of 40-50's wartime music that afforded several short stories and allow me to “be” there in that moment.

Yes, be there. It's more than a motivational slogan, it's a way of writing that so few writers get. We either can't or won't go that far as to immerse selves in that sort of relationship, and I say it because it is true. A story is a relationship, that requires sustenance and attention, much like a child or a spouse. It can die on you if not properly guided or fueled, like the engine of an ancient motorcar. It can blow up in your face like unstable nitroglycerin.

The music is my insurance that I can go back to someplace that I left off, most of the time, no matter what. It's a key that unlocks that part of my brain, much like a bank's vault, to release whatever the hell chemicals it is I need to retrace my steps there. I've even gone as far as to label which albums are used on what manuscript. It's that effective.

I've complained about not being able to write, but here I am, “Live from Matt Malloy's Pub” and everything is moving along fine. Maybe here in a few days Xan will tell where the hell he wants to take his story. I'm just a passenger and goddamn if the driver isn't fond of Slayer.

Bless me O readers. It has been three weeks since my last confession, and what a whirlwind it has been.

First on the docket is discussion of my rejections, and why I feel they were warranted.

I’ve always felt that I’m in a hurry, whether in a rush to get to work in the morning or impatience with a story idea that deserves a great deal more plotting. I submitted two of my pieces: A short story called The Cadillac, and a poem simply entitled Anchor.

I must iterate that the people that responded back to my submissions were fully professional and prompt. The Cadillac was indicated as curious, yet slight, and Anchor was simply not a good fit. Both editors did request that I submit to them again in the future, and I let out a big sigh of relief. Why?

I suppose mainly because I was afraid to let them go. To sell my work. Regardless of what the agreement is, I am selling my children to the industry, every time I accept money in hand for any printed works. There are obviously overlooked exceptions to this rule, but for the most part, I do sell out.

I’m even considering Romance. I hate Romance. You show me a Romance book I like and I’ll sell you ocean-front property in Austin, Texas. Romance to me has always come across as seriously lacking in realism, along with a corny plot, unconvincing scenes and gasping breath for some schmuck who is all muscle, handsome and ‘unique’. Right. All the Romantic men are unique. Just like everyone else. I pick up a Romance and I have to shake myself awake in fifteen minutes.

Romance sells, and I do have the skills to write one, even though I’ll not admit it. I need money, and I need it something bad. Children put a driving fire inside of you to get creative and survive. We shall see how that concept pans out. I’m hoping the husband is able to land a new job and I don’t have to step outside of my genre just to make a buck.


Second on the agenda: Where have I been?

I’ve been around to be sure, but with the entire family ill for two solid weeks, followed up by my sudden and violent submission to whatever virus it is that we had, it’d worn me down. I normally Twitter and write Magnus or Xanox’s adventures as opposed to my own, should the appropriate amount of time arise to issue a new blog installment.

The baby has mastered the art of balancing on two legs, to the point of running away when I notice her diaper is ripe for changing, followed by elfish giggling and moments of hiding. Her favorite letter of the alphabet seems to be the letter B. Ball, bye, Bob, box…she says many “B” words.

She mirrors our attitudes also. This morning, anxiety attacked me as I rushed to get the household ready for work. I shouted in frustration because I couldn’t find my work keycard. Explicitory language was heard all over the house that is, until I hear an echo of the exact same tone of voice that I was using.

Slam on the brakes, whoa.

Scowling like a woman in a midlife crisis instead of a 14-month-old, the child pointed at the ceiling and in a language known only to her and most closely resembling a hungry Sim from Sims 2 game, she let me have it.

We hugged and she giggled, running down the hallway with a soggy bottom.
Posted by Unknown at 3:33 PM 6 comments: