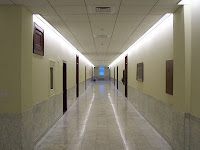 In the light of the examination room, it's obvious what is wrong with her.

"I'm thinking this was a bad idea," Thomas says. He looks to his colleague, brisk in a white coat with two Bic pens clinging to the lip of his breast pocket.

"It's quite alright," Johnson says. He pulls out a pen and scratches notes on his notepad. Moleskine, like archaeologists and artists use. "Where did you say she was found?"

"Basement in Ontario. The owner kept her there because he didn't know how to care for her."

"This is a great discovery. The very first cloned Neanderthal." Johnson chews on his pen cap. "The best part is that we have no paper trail to clean up afterward."

"That could never be integrated into society," Thomas adds. Johnson smirks.

"I think not, unless we shaved her like a mongrel. Besides, she doesn't know the difference. Look at her eyes. Not a shred of intelligent thought behind them. She's apparently very apelike."

"Perhaps," says Johnson. He reaches out to the beast-woman in chains, perched atop the filing cabinet. She growls. He retracts his hand.

"Not that we can tell. It's far too advanced an emotion for her. She's an animal."

"How long until termination?" Thomas asks.

Johnson scribbles notes and looks at his watch. "At this rate? Not today. I wanted one last batch of samples. Autopsy is scheduled for tomorrow evening."

"I wish there was a way we could keep her alive. You know, for the research value."

Johnson smiles in empathy. "You can't grow attached to something like that. If she won't let loose of that leg soon…ah well. We can wait."

"The owner has been cremated. We're in no rush for the body part."

Johnson nods. "We'll deal with the activists later. Every night I'm sorely tempted to run over their tents. It's a media circus out there."

"Do they know of Neanderthal cannibalistic tendencies?"

Johnson shakes his head and slips the pen back into his pocket. "No and God willing, they never will."

Beyond the door, a break-in alarm sounds.

Source of inspiration.
Posted by Carrie Clevenger at 7:00 AM

Ah, let the feast begin! I love it.

Apparently Neanderthals were smarter than you portray, but if she were kept captive in a basement for a long time, she's probably insane. Poor thing :(

Well, yeah! Your flash is early AND very good.

Really like the crisp and unencumbered writing to this piece. Fits very well with the white coats, heh.

I found myself thinking at the denouement, "They do now!"

Liked the way you linked to source of inspiration. Really cool to see another writer's thought process.

Ooo. Way to leave us hanging!

In spite of her...uh...unusual eating habits, and absolutely no focus on her, no name, I actually felt quite sympathetic to her. You've characterized her keepers as detestable people who seem to me have more evil qualities than this poor thing in captivity eating someone's leg. You set up a nice juxtaposition here in characterization, and I'm impressed.

A very cool and clinical piece. Dana's point about the intelligence and social development of Neaderthals is a good one, but there could have been something off in the cloning process, too. Intelligence is a tricky thing.

I want to know who broke in.

Brilliant ending. Hope and dread all at once. Gorgeous work. I love the detachment. It allows the savage cannibal to have a passion that her clinical, evolved counterparts are incapable of. Beautiful prose. Not the usual cannibalism story.

This was pretty neat. I like the comment about zombies, but smarter, as Dana said. It's really easy for some people to dismiss what intelligence is there....

I did laugh at the keeping of the leg part, which was a well timed piece of black humour in an otherwise pretty uncomfortable piece. Some humans really forget that we're all animals, don't they?

The humans don't seem to be very evolved here. Interesting contrast between them and the clone.

Thanks for all the comments. I'd like to point out that is definitely not my strongest piece, so if you did not like it, try a different story under my Fridayflash tag.

This was an experiment in third-person, present-tense to see how I could spice up a boring style of writing. My verdict? It's really hard to write like this, so kudos if it's your regular style.

Marisa mentioned that she liked how I added a link to my inspiring source, I normally do that if it's something I can share, whether the character just kind of walks in, I see an article, or I hear a song, ie: "Tidal" as in Chevelle's "Bend the Bracket."

I wish to improve further, but at the same time push the envelope. You are my mentors and my peers. Feel free to tell if something isn't working for you.

Again, thank you for coming by t o see me every Friday. This is the most valuable experience of all.

Cool cannibalism convolution. One gripe: "Johnson is scribbling notes." irks me. How about: Johnson scribbles notes.

Kudos for going outside your normal writing comfort zone! I'm actually a big fan of present tense, so I thought you did a great job. I love the story, the only thing that interrupted it for me was when you referred to the ability to speak as an emotion. This actually seems like it wants to be expanded into a longer story. Maybe she escapes? :-)
Enjoyed it!

"Johnson scribbles notes and looks at his watch"

Thanks @Draco Torre, you were definitely on the mark there. Edit made.

They had bigger brains than humans but probably weren't as devious as we are. They got killed (and probably eaten) by more efficient killers. Thrown spears FTW!

Blogger is strange. First of all it released yesterday at 2, said it was published on Wednesday (which was when it was drafted) and then fed out yesterday afternoon.

I assure you, I've edited the date and beaten the editor (me) mercilessly.

Loved the bit about keeping the leg!

I think your 3rd person, present tense works very well. Nothing jarred in the slightest (although I probably wouldn't have picked up what David did!)
Like Netta, I too felt sympathetic towards her. I hope she had herself a nice doctor leg for dessert

Great story. Apart from the fact that Neanderthals are NOT RELATED to modern humans in any way, as far as I know. But I liked the scene very much.

This is a cool piece - coolly written and the only warmth I felt was for some cloned beastie gnawing on a human leg. heh Great job!

'Johnson' what a perfect name for this cold erm, scientist (reminds me of M.J.Solender's story last week!)

Nice black humor. I felt sorry for her, despite gnawing on a leg. From your ending, methinks the containment factor is falling apart. :) Great visuals to this!

Good. The X-Files vs 28 Days Later is exactly what I was going with this. Also, the doctors? Pfft. I wanted the reader to feel for the unnamed beastie-woman atop the filing cabinet. I see I accomplished part of my goal. Thanks!

So many cool things about this one - genetic engineering, futuristic a**hole doctors, the media opening pandora's box and nobody worried about the potential soul they just brought into existence. I thought the dialogue drove the pacing nicely. Well done.

I think they should shave her and give her an apartment for an anthropological experiment. Meeting the neighbours would be a fun story.

In much the same way man is related to the chimp. But the sort of relative you only want to see at weddings and funerals. Or tea parties...

Oh. If anyone here follows the science of Intelligent Design, I apologise profusely and hope you'll forgive me for casting a shadow over the entire ten thousand years of the Earth's history.

Carrie - this is a great piece of fiction! I really like that you have a link to the research and play out a possible eventuality of this research.

Interesting how they saw this ancestor as such an animal and could kill it when they are done.

Damn, what other links could man dig up-

The lack of empathy from the keepers certainly draws my feelings towards the ‘beast-woman’. Originally being kept in a basement then held captive by those cold-blooded fools, no wonder she grabbed a leg to nibble on. Great story.

First of all I think it's cool that you know I have a neanderthal in my Ontario basement.
Not so sure I want the world to know that, but hey, Carrie, the leg's out of the bag now.
Pshaw about you not writing your best... WhatEVER... your worst is better than most of our best.

Cathy, you crack me the hell up. XD

Anton, yeah I believe in the missing link.

The rest of you totally make me grin over and over. I just wish I was as good at commenting as you guys. ^_^

Kudos to you for wandering outside your comfort zone. I for one can't write 3rd person in any tense. Not sure how you managed to make me empathize with a creature gnawing on a human leg, but you did. I also wonder: who was breaking in? The PETH folks? (People for the Ethical Treatment of Humans)

Very interesting story. Good build-up throughout, and the ending that left us hanging was quite good, too. Good story!

As I read this, I got the strongest sense that she did understand them, and that there was some kind of intelligence. I sensed it as evil intelligence, but maybe that's the horror mind I've developed since I started reading fridayflash. I'm so glad they left the leg for her to gnaw on.

I like the POV and the tense. I think it all works really well. Thank you for sharing it. ~ Olivia PS: Did you buy your printer yet?

The part that stands out the most to me is "..perched atop the filing cabinet." That little detail screams cold and clinical.
You do third person, present tense quite well Carrie, not that I'm surprised.
Well written!

Great stuff, Carrie. I'd love to see the next chapter in this story!

Ditty, I left it up to you guys to decide what happens next. ;)