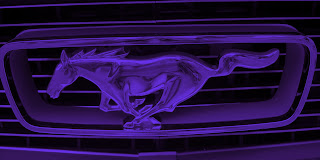 I had a tail on the way to my apartment from the office one night.

A black-cherry Mustang in my rearview, twisting through traffic like a head-lit cobra snake, looming there. I cut a quick right, wheels cutting into the pavement when I gunned the engine. It was a strange sensation to see it there: the distance kept immaculate but intimidating.

My mind raced, spinning through all the names of those who would like to get a piece of me, and well there were a few. There was my crazy bitch of an ex-wife, my last girlfriend; her new boyfriend.

The feeder sprouted into view and I darted up on the freeway. The Mustang followed, sunset ablaze in the windshield reflection, giving it the appearance of being on fire.

I let the window down to get some air and heard it. It had a low growl, except when I sped up and then it'd snarl with unbidden power. I sped past a line of slower-moving traffic, cutting in-between a Winnebago and a diesel F-250 to hit the inside lane, where the road was wide open.

I stomped down on the gas, and watched the speedometer climb. The Mustang responded in turn until I surmised we were doing close to 100.

A low-flying bird came across the highway, but I hit it before I could even respond. The body exploded into a blizzard of inky feathers; deep carmine red splattered over the expanse of my windshield.

The steering wheel ripped itself from my grip, my tires screaming before I did as a semi-hauler disintegrated the front half of my Volvo.

Safest cars in the world, and that's why I survived.

The Mustang passed, and kept going without the slightest lapse in speed as I sat there agape, the dash pinned against the knees I could no longer feel.

Posted by Carrie Clevenger at 8:46 PM

Love it! Though that's no surprise. I am curious whether or not a Volvo would actually survive hitting a semi. I've worked in transportation before, trucks do BAD THINGS to cars. It's pretty gruesome.

"Blame Aerosmith?" I'm thinking more Golden Earring and Radar Love... your story had that kind of energy. Relentless, sparse, clean writing, the energy is palpable, the sudden ending biting strong.
A dazzler, Carrie.
I'm a-liking this thing you got for cars.

Harsh. Paranoia always comes back to haunt you.

Wow, that was a heart thumping hellbent ride!

I like it. But, since I read Crash by JG Ballard, every time I read about a car crash I'm reminded of the book.

Anyway, that's me. I like the cleanliness. Nothing wasted.

Fabulous. I particularly like the description of the bird hitting the windshield. Very graphic.

Huh, never expected to have the proverbial car chase scene in a friday flash. Action packed and thrilling, though (I'm sorry) I couldn't help but laugh (though I shouldn't!) at the exploding bird. That's an image that always cracks me up, and then I feel horrible for laughing.

But come on, feathers exploding? it's funny.

You usually write with attitude, but there's something in here that executes it more smoothly than usual. That "Safest cars in the world" crack is top notch, even for you. I try to point out what I notice working most of the time, but I can't figure out how this car works. It just does. Shame his legs won't.

What a white-knuckler, Carrie... A real nail-biter

This is such a ride. Never lets up from one end to another. I have to say, not knowing anything about the characters works well. And I feel sorry for the bird, but really I'm sort of glad it stopped the driver short. No idea what that says about me.

Awesome. This had power and more, tense descriptions, kick-ass punch. The irony at the end made me laugh...dare I say that out loud? :D Loved it!

What's really impressive about this piece is that the narrative voice is wholly male and utterly authentic.

Oh I SO want a black cherry mustang! Nothing beats the sound of that V8 going vroom!

Thanks for the gripping ride!

whoa, this one raced like a gas fire. smokin.

Lucky for him, he was in a Volvo! Swedish cars rock! So do Mustangs, and I love the description of the roar of the engine. I used to have one myself and loved driving it, but unfortunately my husband totaled it. (He was fine, thank god!)

Yep, this piece has horse power!

Love your descriptions, "black inky feathers" - "twisting through traffic like a head-lit cobra snake" - no clichés in your writing, ever.

Paranoia is right. Tailed or not, it makes no difference in the end. Great descriptions and good tension.

He shouldn't hit the brakes and let that Mustang have a piece of him.

A gritty scene from something longer I'd like to read. How did he get into the situation? What becomes of him with his bashed legs? Very good voice maintained through the piece.

Great details and energy in this one. I enjoyed it a TON!

What a ride :) Loved this little gruesome flash!

You made me cringe the hole time, especially when the poor bird got splashed (sorry pegtej, not funny from where I stand :P) and now I want to know who was on the Mustang.

What if it was just some jerk playing around?

I love the intensity of this. It starts from the first sentence and never lets up. The description of the mustang engine is spot on.

There is a black mustang in my novella (actually it started with a vision of a black mustand with fire rippling alive in the paintwork) and your story gives me a great sense of how the car in my novella might work as a character in itself - rather than just a prop.

Love the way you write... as always in awe.

Vivid! As if that's surprising....
I too am liking this thing you have with cars lately Carrie, and love the desription of the exploding feathers.

Funny - even though I've always hated Fords, (my first car was an Escort, so I'm sure that's understandable), my dream car is a 65 red mustang convertible. Maybe one day....

This was awesome, Carrie. Love that Mustang, and the paranoia was just intense and clammy-feeling.

Woah! Really well written. I loved the image you accompanied the post with as well as it really helped me picture things, considering I know nothing about cars!

We actually had a bird fly into our windscreen once, but the blood was purple, was so odd.

I was holding my breath... crazy.
I love the detail about the bird exploding... vivid!
~2

Vrrrrrrrrrrrrroooooooooooom ... Hey there Little Deuce Coupe, Little GTO - Ride Sally Carrie Ride -- this was more fun than that T-bird Daddy won't take away. Had me singin' along with the great reving you were word-slinging:

And it’s half past four and I’m shifting gear ... Carrie, you're gonna drive me to drinkin' if you ever start drivin' a hot rod Lincoln. You were made for the Mustang, said this Camauro kid.

DAMN GOOD RIDE YOU WRITE!
~ Absolutely*Kate, convertible, wind in my hair - I don't care, I'm reading Clevenger where the Folly's fassst and the descriptions shine like newly turtle waxed chrome.

Well, you know what they say. "Speeders never prosper." (I know it's cheesy but I couldn't resist)