I’ve been talking about BLOOD AND FIRE that I co-wrote with Nerine Dorman and posting little hints about the book coming out in February. Well, scratch that. It’s out now. We submitted it to Dark Continents and ding!  There it was a few days later. (For links, see bottom of post.) 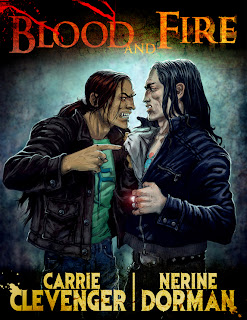 SURPRISE!
And the cover is as Nerine would say, feeeelthy-gorgeous. Two talented artsmen each contributed their expertise and skill to create a cover worthy of the NYT Bestseller list (in my opinion, of course). Nerine and I tossed around some ideas simply because we had such a ball writing and promoting JUST MY BLOOD TYPE, and she has INKARNA coming out in May 2012, so we dreamed up BLOOD AND FIRE.
It had its difficulties. We’d originally planned to project it as another teaser-style book similar to JUST MY BLOOD TYPE, but Nerine caught word that DCP was looking for new shorter works. We decided to go for it. The book was nearly finished, and with the new objective, we had to go back (especially me) and fill in some things that would enable it to be a stand-alone story. Cramming all that info into a book 22k words long without making it one big fat info-dump proved quite challenging.  But we managed.
We had the cover art already ready, after a back-and-forth with the artist, fine-tuning parts of the two characters, me for Xan, and Nerine for Ash. He came through beautifully, and signing off on that was a definite proud moment.
We sent our then current draft of the story to Cat Hellisen for the first beta-read. At this point, I’ve learned a lot about how valuable a beta reader can be to your WIPs. Get one. You really want to pass it under a new pair of eyeballs so you get a circumspect point of view.
Our second beta reader, Melissa Ecker, gave a great perspective on Americanizing some of Nerine’s more obscure references. Her questioning helped us expand on previously vague ideas. As she did it last-minute, and with a WIP on her own, her time was greatly cherished.
Nerine fell ill during the last part of the process and ended up finalizing details from her hospital bed. It was a frantic rush for the cover to meet deadline.
After all the edits were done, and we submitted it to the publisher for review, we needed typography on the cover. What some of you may not know is just how important typography can be to a book cover, especially an ebook. Consider how you view your choices when buying an ebook. Thumbnails. The art and especially the font needs to be easy to spot and hopefully read, even when it’s not much bigger than a postage stamp. Nerine worked with her husband to come up with the perfect typography treatment, via a series of emails and talks. And he did a wonderful job!
I’m proud to present to you Xan Marcelles’s next adventure, BLOOD AND FIRE, and introduce Ashton Kennedy (whose part was written by Nerine Dorman) for your reading pleasure.
BLOOD AND FIRE is only available via Amazon’s Kindle or Kindle apps at this time (all other formats after 90 days), but you can read it on Apple devices, Android via the app, and even just your computer. Consider a read for less than a fancy Starbucks coffee.
Buy BLOOD AND FIRE on Amazon 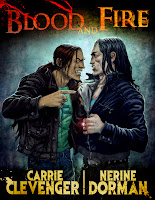 Add BLOOD AND FIRE to Goodreads
Add/Download JUST MY BLOOD TYPE - free!
Thank you to the kind participation of the artists:
Art by Daniel S. Hugo – website
Typography by Thomas Dorman – website
A note of appreciation for our beta-readers:
Cat Hellisen – website
Melissa Ecker – website
Special thanks to my talented co-author:
Nerine Dorman – Facebook page
Don’t forget to like the CROOKED FANG Facebook page for more updates on Xan Marcelles!
CROOKED FANG website
CROOKED FANG is due out in August 2012 from Lyrical Press in most electronic formats.
Posted by Unknown at 7:22 PM

So excited for all of you....I will definitely be checking this out.

Thanks for sharing your adventure with us!

Thank you SO much! You've been with me for a really long time! xx

This sounds and looks awesome. I want to read. Haven't got a Kindle (or any e-book reader) - Hoping I can figure something out lol.

Anyway, congratulations to you and Nerine. I'll raise my glass of whiskey to you guys.

Very proud of you, really.

Very cool cover -- and a huge congrats to you and your partner in crime (I hope she is well now). You have gone great guns this past year! Peace...

Just downloaded it - looking forward to the read!

I bought it and intend to read it over the weekend! Expect reviews soon.

Thanks! I hope it meets your expectations. :) Alannah, the formats will expand after 90 days. Keep watching. xx

Congratulations on the launch, Carrie!