Getting the Cover Art You Want: A How-To

Photo credit: johmau from morguefile.com
By Nerine Dorman
So, you’ve written a work of fiction. Be it a short story, novella or a full-length epic, you’ve either decided to embark upon self-publishing it via a platform such as Smashwords, or you’re lucky enough to bring it out with a small press that will allow you to provide your own cover art. It’s thrilling to see your baby’s cover art as a thumbnail on Amazon but, by equal measure, if you’re not 100% happy with the final results; if the font is just horrid and gets lost in the background, or if the publisher provided an illustrator who got things just plain wrong... It’s going to be damaging to your career and give potential readers the wrong impression about your writing, if they buy it at all.

How do you get the cover art that you want?
Know what you want. Keep it simple. Think about an essential theme of your novel. Look at other novels in the genre. Which covers do you like? What makes them effective? When you’re up on Amazon, you’ll appear with the whole gamut of authors, from J.K. Rowling and her Harry Potterverse down to Joe Public who’s written about his pet hamster Sammy. Is there a scene from your novel, or perhaps a relationship you’d like to bring to the fore? 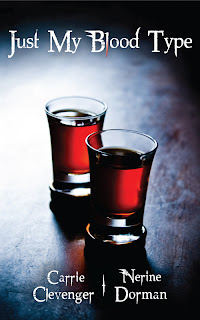 When Carrie and I worked on the illustration for our short story, Just My Blood Type, our tale took place in a bar. Drinks and vampires came to mind, hence the two shot glasses filled with a liquid that was supposed to be rum but suggested blood. We wanted something simple and classy.


Blood and Fire was different. The story is a paranormal thriller featuring two supernatural beings in a fast-paced, conflict-laden situation, so we felt we wanted to show the two at each other’s throats because of the potential for conflict between them. The image must communicate this tension between the two but also leave potential readers guessing when they saw the cover art. Our illustrator was selected on the basis that he specialises in comic books. The typographical treatment harkens back to classic Sandman graphic novels.

Remember, you don’t have to be absolutely literal in depicting a scene from your story. Before you start hunting down illustrators and graphic designers, or even better, artists who provide both services (they do exist), do yourself a huge favour and find out from your publisher what the technical specifications of its book covers are. These include the dimensions, as well as the resolution of the image (depth and width), which will need to be high-resolution of around 300 dpi in most cases (don’t worry, your artist will know what this means). These details must be briefed to your artists.


Choosing the right artist can be a real bitch. Not everyone will have friends who are gifted illustrators or photographers. I’m just absurdly lucky to be in the midst of a highly creative arts community in Cape Town. But if you’re stuck, I suggest swinging past http://www.deviantart.com where there are thousands of fantastic artists showcasing their work. Find one who resonates with you and for the love of all that is unholy, don’t just go with someone who’ll do something for free. A trade exchange of some sort is fine but remember if you pay peanuts, it's likely you’ll work with monkeys. Rather spend money on a good artist. And do yourself a huge favour: ask for references.


When you have your artist, communicate with them exactly what you want. This may involve finding sample images similar in style to what you have in mind. Write a creative brief, draw stick figures but brief your artist properly so that you are both on the same page and understand each other. I was lucky enough to be physically present to direct the shoot for Just My Blood Type. With Blood and Fire, I took care to give a detailed brief via email, and the illustrator later thanked me for being so thorough in communicating exactly what I wanted, down to the last belt buckle.


Artists like to be given direction when they are creating a unique work for a client. They don’t like it when they are asked to “Oh, just draw something.” Remember that they are not mind-readers. Also, their time is money, and neither of you want to go back and forth until everyone’s wound up in knots when they could have spent their time on something useful.


Another important factor to consider is leaving enough space so that you can later crop an image closer. Bear in mind where you’d like to have your title and name to appear.


Typography is just as important as the final illustration. An otherwise beautiful illustration or photo can be ruined by heinous text; fonts that are too overpowering, too textured on a busy background or treated in an amateur fashion. One good example is the font Papyrus used with any Egyptian-themed story. Or Comic Book Sans, in any situation. There are many no-nos that an experienced, qualified DTP artist or graphic designer will avoid. A number of self-taught garage designers won’t know any better, and need to be avoided too.


Once again, provide your graphic designer with samples of book covers in the same genre as your story, ones that you like and that communicate clearly. And trust me, it’s worth your while finding the right person for the job. Ask to see their creative portfolio before you make your decision. And when you work with them, ask them for more than one option. Don’t be afraid to ask them make changes until you are 100% happy. A professional should be willing to hear your side of the story while also standing his or her ground when you’re barking up the wrong tree. When you have three or more options you like, don’t make a final decision immediately. Get colour print-outs and show them to people whose opinion you trust. Ask them which cover they prefer, and why? Sleep on it then go back with your choice. 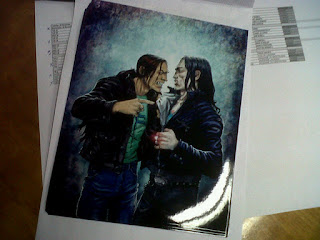 As a last word, I’ll state there is absolutely no excuse for shit cover art these days. One of my pet hates is when people feel that it’s okay to skimp if it’s for the electronic market. Bullshit. Repeat after me: bullshit. Nothing publicly distributed should be a throw-away. You want to put the thumbnail of your story on the same page where your favourite authors’ novels appear and feel justifiably proud. 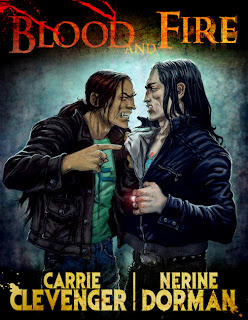 Bio: Apart from her work as a newspaper sub-editor and writer, freelance fiction editing and being a multi-published author, Nerine Dorman is also a qualified graphic designer. She majored in illustration and photography, and has more than a decade of experience in the media industry under her belt, spanning magazine publishing, below-the-line marketing communications, print management and newspaper publishing.
Purchase Blood and Fire on Amazon (currently only version available)
Download Just My Blood Type, free on Smashwords
Nerine Dorman on Facebook
Creepy Green Editor on Facebook
Posted by Unknown at 6:32 PM

nice blog and the cover is beautiful.

Nerine, that was just plain excellent. Best, simplest cover art presentation I've ever laid eyes on – this could also be a primer for any kind of graphic design work. As someone who has a similar background to your own (newspapers, as a writer, editor and graphic artist), I can vouch for everything you've said.

To both you and Carrie, congratulations on a cover that's bright, easy to see (even as an Amazon thumbprint) and well-designed.

And, yeah, Papyrus and Comic Sans should be outlawed.

Thanks for having me over, Carrie. It's been quite a journey with Blood and Fire, and as ever, the process was enjoyable.

And I agree 100% about not skimping on covers for emarket. Like it or not - people do judge books by their covers, and if you slack there, you're already losing a potential reader - so why do it?