Richard Godwin has made the migration to ebook with his debut novel, Apostle Rising. I ask him a few questions and gather his thoughts on the process.

The ebook features an excerpt from Mr. Glamour and four additional Noir stories as an added bonus. Booktrailer after interview.

Now that you've had the book in print, how do you feel about your book migrating to ebook?

There is nothing like holding your first published paperback in your hands. The publishing world is in disarray as a result of mercenary decisions and a certain narrow mindedness that has resulted in Barnes & Noble behaving like school children and Waterstones acting as if the world hasn't moved on. As a result we are living in the midst of a revolution and I think it will be a bloody one. The E Book has changed things dramatically. The agent based model is under threat and distributors are cut out of the chain. The big six are about to have a fine slapped on them by the US Supreme Court for price fixing. Writers previously excluded from publication are now seeing their works on kindle. Amazon has done a great job making it user friendly and available. I believe writing should be easily available. I do not believe a club whose members are not interested in writing should run things. However the standard is still uneven.

Apostle Rising coming out on E Book is great, as people who may have hesitated to buy a paperback can download it for a few bucks. I hope it will encourage them to read Mr. Glamour, my second novel, out now in paperback with Black Jackal Books, and to be released as an E Book. It will also interest me to compare figures, such as they are available to me. The E Book of Apostle Rising contains some extras: a series of deliciously dark Noir stories by me, and an excerpt from Mr. Glamour. It is available on all readers.

Writing is a process, it is a beautiful one because you can never reach a ceiling. To say whether it becomes easier or harder depends on your point of view, whether you are a straight genre author or one who experiments. You learn what not to do. You learn what works for you and your voice. I am atypical since I write in a number of styles, crime, Noir, mystery, bizarro, surreal, satire, literary, sci if. I will go on doing so. I know who my audience is to a certain extent. But it is always nice to meet new people. Whether it is easier or harder to write in terms of the industry is a complicated matter. If you want to write, write. The industry is in trouble. We will see what happens. People will always want to read.

Which genre do you find yourself most at home and eager to write?

It’s hard to pick one. I love Noir, because you don't have to answer all the questions, much like in life. I like crime fiction, and also injecting satire where the so called experts believe in their eternal sapience it doesn't belong. Satire is the eternal misfit. I am also drawn to bizarro. I am comfortable writing literary fiction. The list will go on extending itself, bit not ad nauseam.
Can you link to one of your favorite pieces on the web and tell me why?

I'll keep it short and sweet because lengthy introductions are tedious. Empty Diners AndPassing Trucks gives you a taste of my smorgasbord, and Nat Sobel sent this one onto Otto Penzler for his anthology of the best Noir writing on the net. It’s a kind of Hopper painting in words, about lost people and the myths we need, about perceptions and the truth that myths hide.
On the subject of sexual content, do you feel it is necessary in novels and why?

Sexual content isn't necessary per se, all scenes are context driven. Take John Fowles' The Collector, he could have capitalised on sex, he didn't, it is a great novel. One of its strengths lies in the fact that while the protagonist’s motivation is sexual in a pathological sense, Fowles never writes about sex gratuitously, it is integral to the story and the character development.

If you are writing realism then it is part of a character's life. Many naturalists baulked at it to their historical detriment. To shy away from the subject reeks of moral puritanism and while there may be a theocratic section of so called readers out there intent on making sure nothing more than a kiss occurs in fiction, they have never said one important thing about literature. Art is not indebted to a particular moral orthodoxy and it never has been. Exploring the level of disease and self-hatred latent in sex is also interesting. DH Lawrence opened things up with Lady Chatterley’s Lover. Henry Miller arguably revolutionised the erotic novel with Tropic Of Cancer. To attempt to turn that back is backwards. The YA movement sadly is being monitored by the kind of people who came up with warning labels on CD’s.

What's the most important tool you have as a writer?

Tell me about Apostle Rising.
Apostle Rising is about a serial killer who is literally crucifying politicians. He is recreating the original murder scenes of an old case and leaving no forensic clues. It is also about the effect that dealing with evil has on a police officer. Here's a brief synopsis.
Detective Chief Inspector Frank Castle never caught the Woodlands Killer and it almost destroyed him. Now years later, mauled by the press, and traumatised by nightmares, he is faced with a copycat killer with detailed inside knowledge of the original case.
He and his partner DI Jacki Stone enter a deadly labyrinth, and at its centre is the man Castle believes was responsible for the first killings. He’s running a sinister cult and playing dark mind games with the police. The investigation has a shattering effect on the lives of Castle and Stone. The killer is crucifying politicians, and he keeps raising the stakes and slipping through their hands. Dark coded ritualistic killings are being carried out on high profile figures and the body count is rising.
Castle employs a brilliant psychologist to help him solve the case, and he begins to dig into the killer’s psyche. But some psychopaths are cleverer than others.
Karl Black is the man Castle believes is responsible for The Woodland Killings, and the investigation places him at the top of the list of suspects. Black hates the police and from the moment Castle and Stone visit him he sneers at them and then begins to undermine the investigation.
The novel contains a great twist. No one who has read it has guessed who the killer is and the discovery is a huge shock to the central characters.

And for my last question, tell me what's in your future plans as an author. Any new projects?

I am writing the sequel to Apostle Rising and a new novel. The new book is something completely different. I also have a Noir Italian novella out now, The Secret Hour in English, L’ora Segreta, in Italian. Here’s a synopsis.
Paris Tongue is an accomplished seducer. He has a blond fire about him. He can read a woman’s sexual needs as quickly as he used to pick pocket the tourists who frequent Piccadilly with cameras on their shoulders and maps in their eager hands. One day he seduces beautiful Viola. The Secret Hour is the time when Paris meets his lovers, and allows them to escape from their lives. He makes love to Viola in various locations in London. The wealthy, exclusive districts of Mayfair and Piccadilly form the backdrop to their erotic liaisons, as Viola becomes another woman. But she is married to gangster Max Reger, and he is watching her. As Twilight falls on Golden Square and Paris makes love to Viola, Max steals into the house where they are sharing their stolen time together. And Paris discovers something about Viola.
It can be bought here for £1.55

I am also in the anthology Get Your Goat, with Barbecue The Sink Beast.

Thanks, Richard.
Posted by Unknown at 7:51 AM 5 comments:

Oh Yeah! I Have a Book Out In Print! Duh! - Crooked Fang

I've been SO busy trying to get guest blog posts done that I completely overlooked my own so ta-dah! - CC

Crooked Fang is a vampire tale, but it’s not about vampires. Xan Marcelles is a bass player, kind of an asshole with a soft spot for women’s wiles and troubles and a vampire. Sequestered away in a tavern in teeny Pinecliffe, Colorado, he’s content to take up a chair, pluck a few strings, and keep a drink close to hand in order to stifle his darker nature. 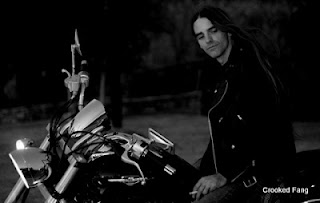 When a blue-haired girl and her abusive boyfriend have a public spat after a Crooked Fang show on Halloween, Xan intervenes, not knowing that his gesture of chivalry will change his quiet lifestyle. With zombie-like creatures, faces from his living past, even possibly a ghost, Xan is forced out of his comfortable space and back into the world…at least for a little while.

Crooked Fang is an urban fantasy, first in the Crooked Fang Series, published by Katarr Kanticles (print) and contracted by Lyrical Press (ebook). For more on Xan and Crooked Fang (including buy links) visit http://www.crookedfang.com/

Sometimes a vampire's past can bite him in the ass.

Xan Marcelles--bassist for Crooked Fang, vampire and full-time asshole, is content with his quiet existence in the backwoods of Pinecliffe, Colorado. But life at the Pale Rider tavern is set to become a little more complicated when he gets entangled with a feisty, blue-haired damsel and her abusive soon-to-be ex-boyfriend.