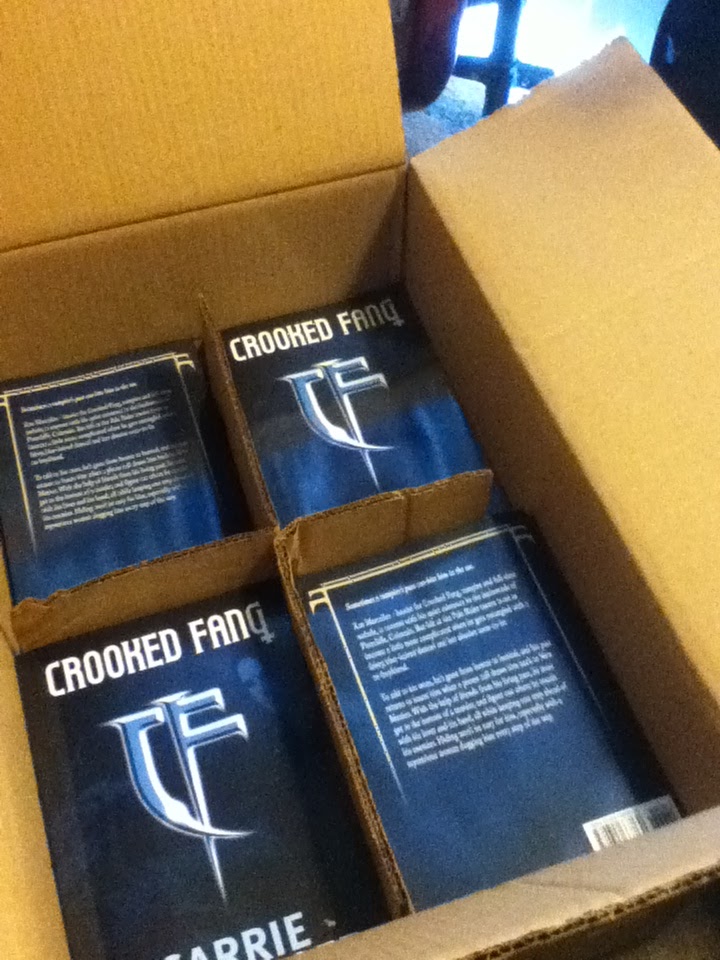 I'd mentioned in the previous post that Crooked Fang would be disappearing from the electronic vendors' virtual bookshelves and that has happened. The vanishing occurred within twenty-four hours of said-notice, in fact. I've decided to take the ebook back to Katarr Kanticles so the ebook and print book can be under one roof and make many happy Crooked Fang parties together. Also, it's easier to keep track of what went where.

Going from Lyrical Press to a different publisher has proven to have some drawbacks, not all which I anticipated. I will admit that it's been a bit of a process to look back through a book previously gone through approximately 12 MILLION TIMES and catch anything left that can be addressed, without alienating the print copy owners. One thing is for certain: print and ebook versions are linked. If one is changed, the other should be as well. This produces [drumroll] Da-dada-DAH, a version 2.

A second round, a second version of one, which should not be all that different. This is the trick to not pissing off the readers. Fortunately, I have the print manuscript, so correcting the digital version, book...this is getting confusing here...should be a breeze. But what were my other implications?

I'd like to take the opportunity here to say thank goodness for Goodreads. This particular situation has more than highlighted the residual worth of the giant review and share book-centric website.
Amazon, however...SHAME ON YOU.
Crooked Fang (Kindle version) had roughly around 44 ratings and 14 reviews, if memory serves correctly. Since the publishers for each version type of book were different, the two stories weren't merged in the Amazonian mega-system, leaving the future edition version of Crooked Fang practically naked. Granted, the thought of Mr. Crooked Fang naked is appealing, however naked ebook listings are not.

These are the things that produce the "ut-oh's" in the writing life. Werd.

I didn't have this problem, but more than a few of the rights-takebackers (yes, I made that up) did. When rights are returned, they usually do not include the cover art. And this is why we see different covers for the same book throughout the years, true? Possibly.
Getting more cover art is no problemo whatsoever as long as you have 1.) an artist, and 2.) payment. Have only one or neither, and there could be an issue.

But wait, one might say. Isn't it just like a transfer over, leaving the ebook posting intact and perfect
with all of its trappings? Ah, but in the future, young Jedi. Each posting is in fact, a storefront for a specific book file (started to write "bile") so when that store decides to drop the strawberry-scented shampoo you've always loved, they aren't going to leave a place-marker on the shelf, no, NO! It will be replaced by coconut, coconut, COCONUT! Like strawberry never existed.

Which brings me to:

How I Will Survive the Crooked Fang eBook Holocaust

Even before my ex-publisher ever crafted a cover, I'd already demanded determined that I wanted to keep the print rights, which (according to contract) could not be the same cover as the ebook. This led to an alternative version variety fuck it, version of the Crooked Fang cover. The very same that graces my print version book to this day.
Since I had to essentially go off on my own blaze of glory direction, editing was thrown in at the checkout stand also. Which left me with a lovely document just begging for release. That came out so wrong.
Annnnd! I'd commissioned a website already out of pride foresight for marketing, so I still have that same storefront (which is a front for other stores) website url and the whole blue thing going on.

So, as you can see, I'll be fine. A little extra crap I did back in the pre-publishing days paid off. A fortunate turn of events. Hell, I was just lucky.

In case of a fire (sale) are you prepared?

Just kidding. Sounds as though this has all turned into quite the process. And that it will have good long-term implications and results. :) Good for you! And I'm glad you'll be able to add back some things (such as accent marks and the like) that you had to leave off before.